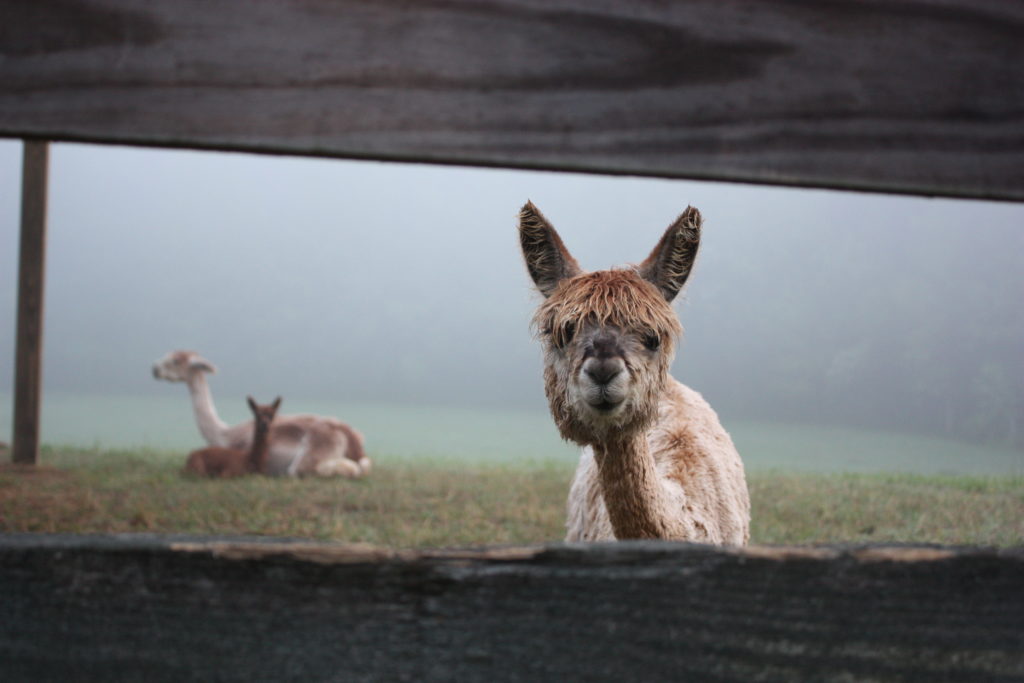 My cousin Katherine is staying with us this month while she does a PA rotation, and this morning I think she got the best photograph of dearest small girl Sparkle. This shot basically sums up Sparkle’s personality perfectly. She is the first one to reach us when we come into the pasture, and she keeps that eternal question mark in her big black eyes.

Mama Carmela and baby Pancho in the background — priceless.

“Wake at dawn with a winged heart and give thanks for another day of loving.” – Kahlil Gibran

This is our first “baby,” otherwise known as a cria, born on May 1. Happy birthday Pancho Villa! He is big and bouncy and curious. All of the girls seem to take a part in making sure Pancho is happy, and the guard llamas, Powderpuff and Gracie, are vigilant in keeping an eye (or a half eye) on him at all times. He’s shy but he shows a lot of personality, and we think Senorita Sparkle (that’s her right behind him) is his favorite since she’s closest in size to him. Did I mention the big eyes? Good thing he can’t ask for money, because we would give it to him. 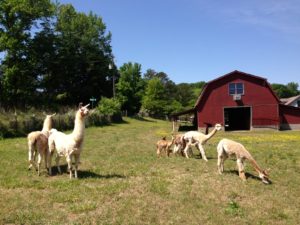 Although it feels longer, in fact it’s only been a few frenzied months. Big G and I were sitting in the dentist’s chair (not in the same chair, our appointments were at the same time!) in early January and talking about our recent big move from East Atlanta to the farm in Fairburn. The discussion turned to what kind of animals we would get to populate 12 acres. I invoked my “no harvest” rule, and Dr. Carol Wolff (best dentist in Atlanta if you need one!) said, “How about alpacas?” Hmmm.

That began nightly internet research, books checked out from the library and multiple farm visits. We lost one herd during a nap (long story, big fight) and eventually bought our first group of four females (known as our foundation herd) from Tony and Theresa Pitts at Deepstep Creek Alpacas in Sandersville, Ga (thanks ya’ll!). Four became five when Lady Carmella gave birth on May 1 to little boy Pancho Villa. Five became six with our last-minute purchase of Senorita Sparkle (best point-of-purchase buy ever). And six is really eight because we also acquired two guard llamas, Powderpuff and Gracie, thanks to Southeast Llama Rescue and Deborah Logan.

All are acclimating nicely to new scenery, each other, and us. We’ll post more photos soon, but King Bee Alpacas is now officially open for business (and visitors — come see us!).

Quote for the day: Keep Calm and Alpaca On.