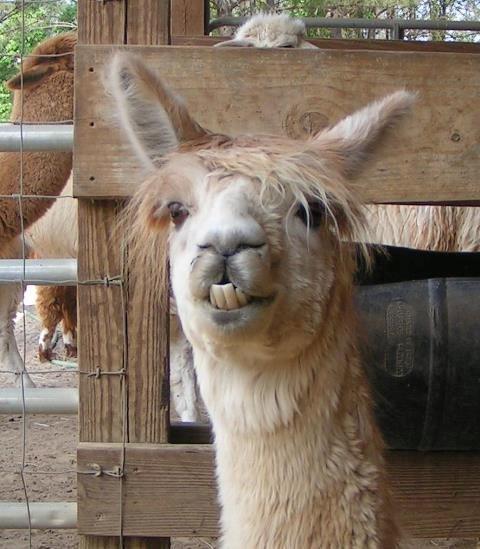 This is Lady Carmela. She is the best mother alpaca in the world. Or so we think. Of course she is the mama to Pancho Villa, and if you sneak up early in the morning or late in the afternoon mama and son are always resting side by side. And then there is Sparkle. Sparkle, whose real alpaca mom died giving birth or soon after and was bottle fed. Sparkle of the, “Where’s my mama?” And “Will you be my mama?” constant hum.

Although Sparkle is almost a year old and Pancho is 3+ months old, they are almost the same size. I try hard to be Sparkle’s mom without overstepping animal boundaries. But about four or five weeks into of alpaca ownership I noticed that Sparkle seemed to sneak under Carmela and start nursing while Carmela was eating grain.

I didn’t know if this was “right” or “wrong” — would it affect Pancho? Would Carmela kick her if she discovered it wasn’t Pancho. Was it too weird? Something in me just let it keep going, encouraged it really, as I would keep feeding Carmela a little more to make sure she didn’t discover it was Sparkle. After awhile I realized she knew exactly who was there, and she was actually okay with it.

A few weeks later we had Sharon Bogenshutz from Georgian Oaks Farm out to do a consultation on our herd (thanks to Sharon and Raymond, we learned a ton!). They asked if Carmela was Sparkle’s mother and we told them the story. When we got to the part about the, um, nursing mix-up — I swear I saw their heads jerk around. Raymond said, “Do you have any idea what you have?” Sharon said, “This will give Sparkle a much better chance of building her immune system up.” Raymond said, “I’d never, ever sell an animal like that.” Then we knew that Carmela didn’t just have a gorgeous underbite, she was the mother of all mothers. Sparkle thanks you Carmela, and so do we.